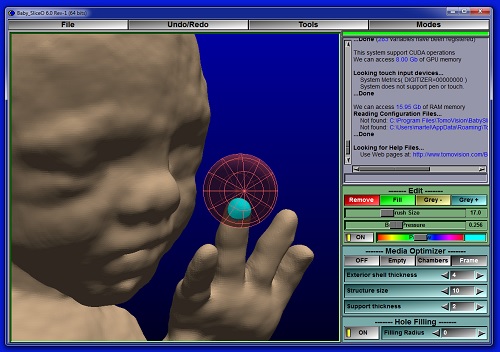 Baby SliceO is designed to view 3D anatomical volumes in Virtual Reality (VR) and to create 3D printable models of these volumes.

Baby SliceO is derived from the sliceOmatic software. It is optimized for 3D ultrasound datasets, it is therefore an ideal tool to offer expectant parents a VR encounter with their unborn baby.

It can work directly with almost all of the 3D ultrasound data formats in either Cartesian, Cylindrical or Spherical systems.

Baby SliceO is written using the CUDA language, enabling it to use the power of the massively parallel Nvidia GPU.

Its powerful edition tools enable you to clean up your data and produce beautiful models that you can send directly to your 3D printer.

Some researchers also use Baby SliceO as a format converter to access 3D ultrasound datasets. 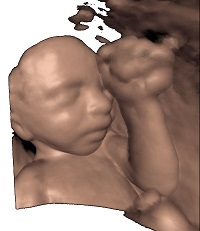 In the volume rendering mode, the program will automatically remove or attenuate any obstacles in front of the baby for you, simply load the dataset directly from your scanner and start the "Volume VR" mode. If your dataset does have a few artefacts still visible in front of the volume, you can edit them out in seconds directly in VR.

The modules of Baby SliceO have been optimized to work with ultrasound datasets. Its highly interactive segmentation and edition tools help you isolate the relevant voxels and remove undesired tissues and artefact to create 3D models of unborn babies.

The program read both 3D and 4D models. When using a 4D models, you will be able to easily navigate the multiple 3D datasets to select the best one to export as a polygonal model. 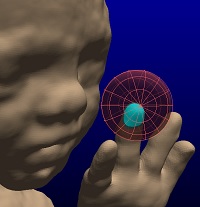 Creating 3D prints from the ultrasound do require more manipulations, but using the "Edit VR" mode, you can do all the editing and retouching of the volume directly in VR in record time. Your dominant hand manipulates the sculpting tool while your other hand holds the 3D model. With the stereoscopic VR goggles, you have the impression that the model is right there in front of you. It is almost impossible to describe how fast and easy it is to prepare your model using this VR mode.

Most 3D ultrasound systems store their datasets with voxels expressed in a spherical system using proprietary file formats. They sometime also can export a "re-sliced" version of the data in a more standard DICOM format. Baby SliceO can directly import the 3D datasets produced from most of the ultrasound manufacturers. It does not matter if these datasets are in DICOM or in a proprietary format (such as the ".vol" Kretzfile from Ge or the ".mvl" Medison Volume from Samsun gor one of the many "Private TAG" DICOM variations out there...), Baby SliceO will read them! 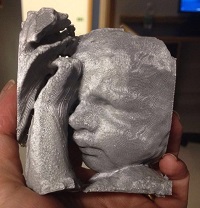 Baby SliceO create and export 3D polygonal models. You can export the data to your 3D printer in up to 6 polygonal formats including STL, and OBJ.

Not only will the program will let empty your models with the click of a button to economize on the printing media, but it will also create internal structures inside the model to give it more rigidity.

Baby SliceO is written using the CUDA language, enabling it to use the power of the massively parallel Nvidia GPU. But this mean that it can only work with graphic cards that have the Nvidia chipset. And even then, you need a graphic card that support CUDA 3.0 or higher. This limit you to cards having the Kepler, Maxwell or Pascal micro-architecture.

To know if your graphic card is compatible you can check Nvidia's web site at:
https://developer.nvidia.com/cuda-gpus

VR Mode: The "VR Edit" and "VR Volume" modes can only be used if you have an Oculus Rift and the Oculus Touch devices installed on your system.


Note: You don't need a license to evaluate Baby SliceO!
However, without a license the program will have some limitations.

Price, How to buy


Prices for a new licens and for token renewal.


If you want to keep up-to-date with the latest versions of Baby SliceO, you need to maintain a valid update contract.